Well hello to you, June, you overly-warm month, you. And hello to this month’s installment of Netflix Pix (I still can’t get over how catchy that title is). This blog has spent the last couple of weeks taking a look at what we can expect as soon as the daylight becomes shorter and the weather mercilessly becomes cooler once September rolls around. But now it’s time to get ourselves back on track with the here and now.

Sure, we could ask the question of why anyone needs something such as instant streaming Netflix offers during a time filled with such beautiful sunny weather. But how about those moments when it’s simply too hot to bare the outdoors and all you’d like to do is sit at home in that nice, cool air conditioned living room and spend a couple of hours with a movie or television show you may have never seen before? Come on, now. Those days do exist, you know. The poolside isn’t for everybody (especially if your skin color resembles something of a dead crab after spending more than 15 minutes in the sun, such as myself).

So alas, below are this month’s five suggestions for what you could instantly stream on the worldwide phenomenon widely known as Netflix. Take these into consideration when the storms begin to roll in, the rays from the sun prove to be too piercing, or, well, you happen upon a few vacation days and the only thing on your calendar is one big fat load of nothing. Yes, enjoy the weather. But enjoy the following suggestions as well.

1. “Spectacle: Elvis Costello With …” — And it’s not just because he is the only person I’ve ever met who spelled my name correctly on the first try. Nor is it because I have an impending date with the songwriter in a few weeks. And, well, it’s not just because the show is now extinct and he decided to give it up after a mere two seasons. The brainchild of one Sir Elton John, this is the quintessential music-lover’s talk show. The entire first season is available to stream on Netflix, and if you fancy yourself a music buff on any level, I can promise you with a 100 percent certainty that you will find at least one thing to enjoy in every episode. Very rarely do talk shows get it right when it comes to music, and it took two of the coolest guys in the history of rock to finally discover a way to make it both informative and entertaining. A reggae mash-up of The Police’s “Walking On The Moon” and Costello’s “Watching The Detectives?” Check. Kris Kristofferson performing a haunting solo version of the third greatest song ever written, “Sunday Mornin’ Comin’ Down?” Check. Herbie Hancock remembering what it was like to score quite possibly the greatest jazz-music movie ever, “‘Round Midnight?” Check. Great performances. Insightful commentary. And the coolest guy to ever throw on a pair of thick-framed glasses. What more could you want?

2. “Jack Goes Boating” — Full disclosure: My favorite current-day actor is Phillip Seymour Hoffman. This happens to be his directorial debut (which, if you ask me, is reason enough to give it an hour-and-a-half of your time, especially considering how you can stream it at any given moment). It also happens to be a play that critics far and wide adored, especially when that play recently had a run featuring the core group of actors in this film. So expectations are high, right? Well, unfortunately, they shouldn’t be. While the movie itself is fine enough, the higher you set the bar, the more likely you are to be disappointed. But that doesn’t mean this is a bad movie by any stretch of the imagination. The only actor to appear in the movie — yet not onstage with the rest here — is the always-lovely Amy Ryan (whose turn on “The Office” provided some of the best moments that show has ever seen). Sure, it’s a little artsy. Yes, maybe the plot is a little hollow at times. But you get to see Phillip Seymour Hoffman in faux-dreadlocks. That’s got to count for something, right? Besides, it’s a love story. Who doesn’t love a good, old fashioned love story in the middle of June? That’s what I thought.

3. “Dexter” — Seasons one through four are all available to stream, and to be frank, you are an idiot if you don’t give it a shot. For those who have already given it a shot, you probably know that the sixth season is a mere couple months away from starting up, so what better way to reacquaint yourself with your favorite serial killer than to go back and watch Jimmy Smits run around in Miami, or John Lithgow resurrect his career in the most captivating way possible? I did my best to dismiss the show myself before being given the first season of the show on DVD a little over a year ago. It just didn’t seem feasible, I thought. Plus, I already knew the show had a tendency to become a bit cheesy at times. Naturally, I learned I was completely right when assuming those two things. Still, that didn’t stop me from falling completely head over heels in love with watching Michael C. Hall act circles around any other leading television man today. And if you want to know what acting is, watch as his sister on the show (ex-wife in real life) provides some of the best acting Showtime has ever seen midway through the fourth season. One episode and you’ll be hooked. That’s a pinky-swear.

4. “Casino” — All right. I know, I know. You are going to have to carve out a good three-and-a-half hours for this one. It just recently made its way onto the $5 rack at Wal-Mart. And chances are you could see it on TNT any day of the week, if you really, really wanted to check it out. But there are certain words you can’t use on TNT. And there are certain things you can’t show on TNT. And grabbing it for five bucks at Wal-Mart means stepping out of that air conditioned living room and braving the heat and obnoxious crowd. And those three hours seem more like three seconds once you strap yourself in and become completely immersed in the plot, characters and acting. One of Martin Scorsese’s best, this move has more punch than all “Fast & Furious” releases combined. Sharon Stone has never, ever looked better. It’s entirely possible that this will end up being Robert De Niro’s final great performance. And Joe Pesci. Come on, now. Joe Pesci. Love him or hate him, the character he seems to play in every single movie he’s ever done is, at the very least, entertaining. If you like drama, gambling, money or just plan great acting, this is definitely worth your time. Especially when the alternative is attracting sunburn somewhere else.

5. “Young @ Heart” — I counted a total of seven different times I cried while watching this movie. Sure, I could blab on and on about what it’s about, why it’s so heartbreaking or the 5,392 reasons you really should carve out a few minutes to stream this before heading to the pool. Instead, though, how about I just offer up the trailer … 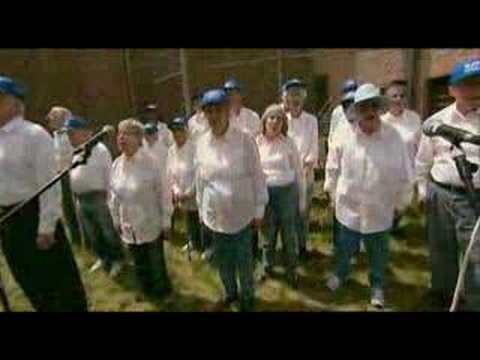