Why, hello to you, October. So far, you have given us the biggest television news of the year (and if you don’t think I’m going to weigh in on such arrested developments later this week, you are just as nuts as three Buster Bluths), cold weather, more football and a crowded calendar that will apparently allow me a grand total of 20 hours of sleep for the entire month.

Still, my attitude toward you and your depressing ways has admittedly begun to turn, October. For some odd reason, I find myself enjoying this change in pace/weather more than I have in previous years. I now find myself hoping for nothing more than continued rainy skies and reasons to blast the heat through my increasingly unpleasant apartment.

That said, I have been paying much more attention to my Netflix mail these days. Such weather makes it oh so much more enjoyable to sit down with some potatoes, lemonade and movies, and you should be strongly considering ways to carve out more time to do so yourself. I mean, goodness. What else is there to do? Find another Oktoberfest?

So, as we always do for the first post of every month, here are five suggestions for those of you who have stuck with the Netflix streaming package and have no intentions on defecting over to the unfortunately named Qwikster. Because as the days become shorter and the nights grow colder, there really, honestly, quite certainly may not be a better thing than cuddling up with some entertaining stories and Internet-connected programming. Now, go grab yourself a cup of hot chocolate and enjoy.

1. “Breaking Bad” — You really, really don’t want me to do this again, now do you? I didn’t think so. So in lieu of such ramblings, check out Aaron Paul’s acceptance speech from the 2010 Emmys. And if the committee members have any brains, they’ll be sure to reward the man again next year when the show becomes eligible again. Goodness, what an incredible season this has become.

3. “Biutiful” — It’s just great. Great, great, great. Javier Bardem’s performance is as great or maybe even a little better than his wife’s performance in the nearly-as-great “Broken Embraces” a few years ago. Yes, this is a foreign film, so you have to (gasp!) read throughout all two-and-a-half hours of it. But man, he earned that Oscar. Forget “No Country For Old Men.” If you have to pick one Javier Bardem flick, this is it. Actually, if you have to pick one recently-made foreign movie, this is it. Actually, if you want to see some fabulous acting combined with a heart-breaking slow-moving film, this is really, really it. Believe the hype here, friends. It’s worth your time.

4. “Conan O’ Brien Can’t Stop” — A dear friend of mine told me he recently watched this and it immediately reminded him of me. Thus, I need to see what this is about if, for no other reason, to figure out if he was trying to insult me or compliment me. Either way, though, I just received an email that said … the DVD is in the mail and it will be here tomorrow. So, well, I haven’t seen it. But I have been wanting to see it (regardless of any, “you remind me of him” messages) for quite some time. So maybe we can all join in together, watch it this week and take to this blog to discuss? Sounds like a plan? Sounds like a plan. In the meantime, here’s the trailer to hold both you and I over. 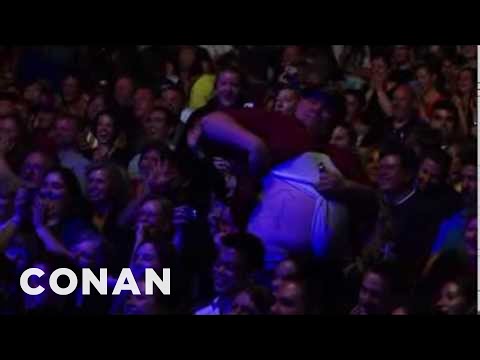 5. “Saw: The Final Chapter” — Because it’s Halloween, silly! Well, that and if you were to force me to proclaim one thing no one ever really needs to know about me, it would be the following: I have seen all seven “Saw” movies. It’s true. Back in the deep, dark and distant days in which I shunned all movies and thought going to the theater was about as fun as tearing out my eyebrows, I was lured into the first installment by a friend and a then-girlfriend of mine. And the rest, as they say, is history. In for a dime, in for a dollar. Maybe it’s my undying loyalty to things. Maybe it’s my stupidity. Maybe it’s both. Either way, the “Saw” movies are great for Halloween, right? Right. So do yourself a favor and take some time to sit down with Jigsaw and educate yourself on how this saga actually ends. Here’s a hint: It’s not what you expected (cue the ghost sounds).