The 2012 Golden Globes ceremony happened last night. I was buzzing around the fine city of Frederick during the telecast, so I admittedly didn’t see the show as it was happening. That said, I did eventually turn to my computer to find a video of Ricky Gervais’s monologue. Why? Because he’s a genius, silly.

Naturally, everyone hated it. Snappy headlines unfairly said such things as “Ricky Gervais bombs at Golden Globes” or “Third time’s not a charm for Ricky Gervais.” According to a poll on theWashington Post‘s Web site, 46 percent of 356 voters claimed that his monologue was “Not biting enough, especially given all the hype.” So … you complain when he’s too crass, but you ridicule him for not being mean enough? Really?! Injustice! Notice all the exclamation points.

But I digress. I will not fill my tiny head with allusions that make me think you turn to this blog for a list of the ceremony’s winners (because we all know you don’t). Nor will I allow my already-inflated ego to enhance itself more with the idea that any of you might actually care about what I thought of who won (my love for George Clooney and Michelle Williams knows no bounds) or who didn’t win (really? Nothing for “The Hour?”).

What I will do, though, is direct your attention to a column from Pete Cashmore, founder of uber-hip Website Mashable, that appeared on CNN.com Monday …

“I watched the Golden Globes on Sunday night. Live. On TV,” Cashmore wrote. “That might sound unremarkable except that I can’t remember the last time I intentionally watched a scheduled show that wasn’t on-demand, at a time of my choosing. I’m part of the generation the TV networks have nightmares about: the generation that’s quite content watching all its media online. … Yet something curious is happening. Increasingly, as topics begin to bubble up on social networks such as Twitter, television has ceased to be a passive medium. With live commentary from our online contacts, people such as me are increasingly seeking to be part of these mass movements.”

He’s right, and he brings up a pretty interesting point while bathing in right-ness.

I wasn’t able to catch the show live, which — as you might have been able to gather from previous trophy shows and me subsequently taking to this blog to write about them (hello, Emmys) — is something I enjoy doing. But as my night was coming to an end, and I finally made it home after a long, excruciatingly cold-weather day, I realized that I didn’t really have much of a desire to sit back and watch the ceremony in its entirety on NBC’s Website.

Instead, I found out who won (though text messages from friends kept me informed throughout the night anyways), called up Gervais’s opening speech to watch online and promptly went back to the second disc of the third season of “The Wire.” The truth of the matter is that because I hadn’t been able to see it organically happen in front of me, I had no desire to watch highlights or anything of the like after the fact.

Thus the question is posed: Are there certain things that we as television-watchers simply won’t take the time to view if the time of original airing has passed? Take live sports, for instance. Yes, I have watched quite a few games as they have occurred, streaming live from my computer, but at the end of the night, do I ever go back and watch clips from the day’s games that I have missed on ESPN.com? In a word, never.

And as Cashmore points out, the invention and implementation of social media may just have something to do with that lack of interest in things that have already happened …

“I didn’t plan to watch the Globes, but as Twitter and Facebook lit up with buzz, I couldn’t help but be drawn in,” he wrote, before eventually adding a paragraph that deserves to stand on its own …

“I see Twitter breaking my habits for other content types, too: Breaking news events such as last year’s devastating tsunami had me turning on the nearest TV set. Not because the news wasn’t accessible online — it was — but rather because at times like these we seek out real-time information and a sense of community. TV plus Twitter creates that experience.”

No, wait. Again, to make sure you read that. Well said.

Maybe the demise of actual normal television watching is a lot further away than some of us (i.e. me) had predicted. We love that communal feeling — that notion that we are actually watching things develop right in front of our eyes with millions of other people at the exact same time. Not to say that such a thing can’t be done on a computer screen, too — I’ve been intently watching the NFL playoffs live on my desk-top and incessantly text messaging anyone who might seem even slightly interested at the end of each game-changing play — but even so, it’s impossible to not concede the fact that sooooooooo many other people would never even consider such an option in today’s world of television viewing, especially when you do have the option, as Cashmore points out, to combine both traditional TV habits and the new media of today.

Still, the point here is that while many people rely way too much on DVRs and official video from networks’ Websites, the urge to migrate to live television will always exist (whether that be on a normal television or some bootlegged streaming-content Website, mind you). And regardless of however you happen to get your media these days, that’s got to be a good thing for the television industry moving forward, right? Right.

Now take six minutes and decide for yourself if Gervais deserves the criticism he’s been getting (the Johnny Depp moment is funny, darnit, and I will not be told otherwise!). 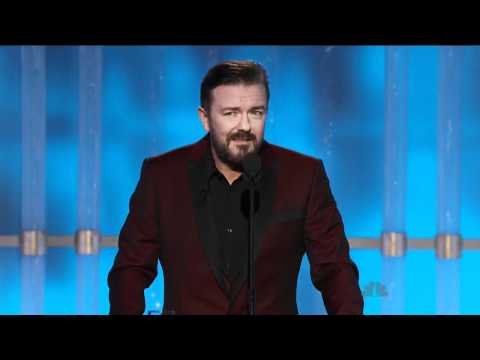