Boy. Those last 12 months stunk, now didn’t they? Thank God for new years and thank God for the instant streaming option that Netflix offers. That guy — I’ll tell you what: He knows what he’s doing.

This month, we begin the year right with five picks for you to consider when the cold becomes blistering and the days stretch all the way to 31 on the calendar. Seriously, January — is there anything you could really offer us to make up for your less attractive qualities? All you’ve got is a stage for some of the worst snowfall this country has ever seen, a whole bunch of meaningless basketball games and the worst movies to be projected onto a theater’s screen in the calendar year. Goodness, gracious. At least February has the Super Bowl!

Anyway, below are a few ideas for you to consider when the hot chocolate is downgraded to warm and the electric blanket is out of juice. We have the television show that resurrected Danny DeVito’s career from the depths of irrelevancy, an odd, of not surprisingly OK dude-comedy with the always-terrific Judy Greer, a sad portrait of a failing romance (yay!), and the film that rose from the ashes of the most infuriating few months of Humphrey Bogart’s life. It’s like fate, I tell you. Fate!

So, sit back, have a few leftover holiday cookies, call the Chinese restaurant and snuggle up with a few of the following picks throughout the next four-plus weeks. Come for the Robert De Niro directorial debut. Stay for the Charlie Day dessert.

1. “Jeff, Who Lives At Home” — This is a surprisingly affecting little movie. At 83 minutes, it’s a nice, quick in-and-out indie flick that doesn’t overstay its welcome, which is good, because even though it runs less than an hour-and-a-half, it seems like if it happened to add an extra three minutes, the whole thing would be ruined. Ed Helms and Jason Segel star as brothers who have become a tiny bit estranged and completely disconnected from one another, one looking for direction, the other looking for … something. It’s directed by the Duplass brothers, and if you remember how odd and confused “Cyrus” made you feel, you’ll know exactly what you are getting into with this particular movie. Judy Greer turns up for another memorable performance as Helms’ onscreen wife, and … well, that’s all I’m going to say about that (hey — watch it yourself!). It’s a little bit of different, a little bit of hard and a little bit of funny. Be prepared to feel like having no idea how to feel.

2. “Blue Valentine” — … And speaking of Jason Segel … his rumored muse, Michelle Williams, turned in a fairly memorable performance in this flick alongside Ryan Gosling as the two essentially broke down why 95.2 percent of all marriages these days end in divorce. And now you — yes, you! — can see it firsthand on Netflix, as “Blue Valentine” has only recently been added to its instant streaming catalogue. It’s an interesting case study in how movies are consumed these days, really. When it was first gaining steam all the way back in 2010, before anyone saw it, mind you, it seemed to be The Movie Everybody Wanted To See. But then a few people saw it and said it wasn’t great (it was just good), and it seemed like everyone in the world began dismissing it for one reason for another (the initial NC-17 rating didn’t help its accessibility, either, remember). Me? I waited about a year before finally seeing it (I would have killed to see it in the theater, but it was not to be), and as far as I’m concerned, it’s as good as anybody could have hoped it would be. Then again … who am I? Just a guy who likes chocolate and Big Macs. In any case, you can’t find a more honest or accurate depiction of this precise type of situation in today’s world than this movie. If there’s one pick you take away from this month, it’s gotta be this.

3. “It’s Always Sunny In Philadelphia” — Seasons one through seven are here, and while it may be spotty at times, this Tiny Show That Could is certainly worth checking out, if only to see what all the fuss is about. It revived Danny DeVito’s career (but you knew that). It launched Charlie Day’s career, a career that I actually really like, but seems to already be on the wrong side of Flash In The Pan Mountain. It brought Rob McElhenney and Kaitlin Olson together in a real-life marriage for which you have to root. And, most importantly, it made every Bro in the universe rush to buy Paddy’s Pub shirts after trying on jeans with holes in them from Gap.

4. “Sabrina” — No, not the 1995 version with Harrison Ford and Julia Ormond, silly. The 1954 version with … who else … Audrey Hepburn and Humphrey Bogart. She was up for the Oscar, Billy Wilder was up for Best Director, and, like clockwork, Edith Head took home the trophy for Best Costume Design (though if books I have read on the making of “Breakfast At Tiffany’s” are to be believed, this movie marked the beginning of the long-running collaboration between Hepburn and Hubert de Givenchy — see: that incredible black cocktail dress the star wears — and he was the one actually responsible for her wardrobe in this flick, but who’s counting?). Either way, this may all be overshadowed by how miserable Bogart reportedly was on the set of this rags-to-riches tale. Legend has it, not only was he disgusted with Hepburn’s acting abilities, but he was also convinced that Linus Larrabee was a character impossible for him to portray. All doomsday rumors aside, the end product is some of the best writing Wilder has ever produced, in my utterly irrelevant, tiny-minded opinion. It launched an affair between Hepburn and William Holden, and you can see the chemistry leap off the screen. And if none of this sounds even slightly appealing … just watch it to see that dress, guys. My God, that dress.

5. “A Bronx Tale” — The single story that made Chazz Palminteri’s career. It was initially a one-man show. It was Robert De Niro’s directorial debut. It was allegedly based on Palminteri’s actual life. And, of course, it more than likely allowed him to open Chazz: A Bronx Original, a spectacle of a restaurant in Baltimore that has some pretty great pizza. Have a look … 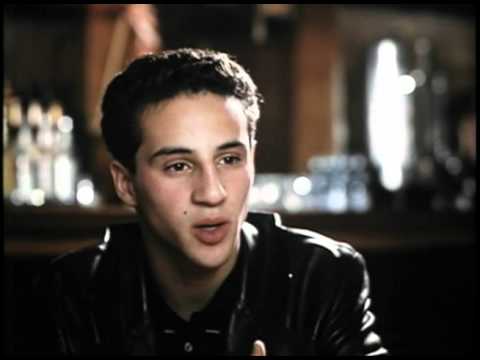