September. Mighty September. School is back in full swing. Football has officially returned to our hearts. The leaves are changing colors. The days are getting shorter. And we celebrate the single most confusing holiday America offers, Labor Day (speaking of which … Happy Labor Day!).

It also brings five solid suggestions from Netflix’s streaming catalogue to keep you warm through the nights when you might be forced to revisit your home’s furnace for the first time in a long time. And hey — there have been better lists than the one that’s attached to this month, sure, but don’t forget the unfortunate fact that there have also been way worse (like that one month with “Daydream Nation” and “Everybody’s Fine.” Yikes).

For 2013’s version of September, we have an odd, well-intentioned, somewhat fascinating documentary about, of all things, cinematography, which also happens to be narrated by Keanu Reeves (yeah, just wait until we get to that thing); an Oscar-winning performance from quite possibly the best actor to ever get on a big screen; a silly romantic comedy that isn’t nearly as bad as you might think; one of my favorite Ben Stiller movies; and one of last year’s best forgotten films.

So, behold this month’s Netflix Pix, still going strong (i.e. crazy) after all these years. Because that Labor Day picnic will be over before too long and you’ll be wondering about what you’re going to watch as you crawl into bed, ready for a four-day workweek.

1. “Greenberg” – In an unofficial poll I conducted recently, I have found that I am the single person in the history of the world to not only like this movie, but love this movie. Noah Baumbach, he of “Frances Ha” and “Squid And The Whale” fame, knows how to do pretentious and uncomfortable well, and here he does it, in my wrongheaded opinion, perfectly (also of note: Jennifer Jason Leigh, his ex-wife, shows up here alongside the fabulous Greta Gerwig, to whom the director/writer is now romantically linked. Scan. Dal.). Ben Stiller, in all his angsty anger, is brilliant as the film’s namesake, a character so impossible to warm up to no matter how hard you try. The knock on it is that it’s too slow and uninteresting, but those who argue as much probably shouldn’t have ever sat down with the movie to begin with. You know what you’re getting with Baumbach, and any quick glance at any quick trailer would suggest that you should know what you’re getting with the story at hand: A misguided, lazy dude in need of a kick in the pants that would almost assuredly not change a darn thing about his tragic life, anyway. Better yet is the original soundtrack from beloved LCD Soundsystem (R.I.P.) leader James Murphy. If nothing else, the music will make these 107 minutes worth your time alone. For my money, it’s one of the three best Ben Stiller movies in all the land, and we all know how many Ben Stiller movies there are, floating around out there in the universe. Feeling lost? Feeling bitter? Watch this thing and marvel at how childish you, yourself, probably look. It’s the cruelest kind of therapy, but it’s also some of the most effective. You won’t regret it.

2. “Side By Side” – What if I told you John Malkovich, Danny Boyle, George Lucas, James Cameron, David Fincher, David Lynch, Robert Rodriguez, Martin Scorsese, Steven Soderbergh and Christopher Nolan were all interviewed as part of a documentary focusing on the death (?) of film? But then, what if I told you that the documentary would be narrated by Keanu Reeves? Would you still watch it? You should — ignore Special K if you must, but there’s some wildly fascinating stuff in here. Need proof? Check out the trailer … 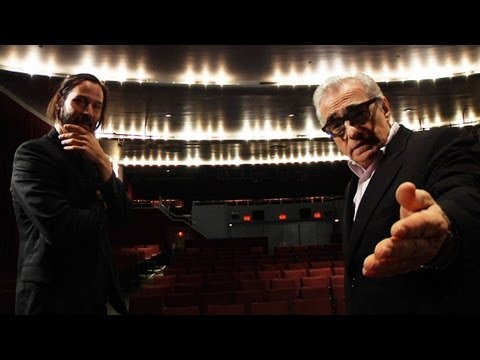 3. “There Will Be Blood” – Paul Thomas Anderson. Daniel Day-Lewis. Paul Dano. I mean, you don’t really need to hear much more than that, now do you? Lewis, predictably, took home an Academy Award for his performance and he earned every inch of that statue. Yeah, you need to carve out a handful of hours to watch it, but trust me: It’s worth every second to see how the story of an oil man, Daniel Plainview, takes its many sin-filled turns. Greed. Murder. And just about every other wrong thing the Bible could possibly outline shows up, and as the Sunday twins (both played by Dano) come and go, you very literally begin to realize that despite its marathon runtime, you can’t turn it off, and you can’t look away. Dano’s character brings that religious element into play with more vigor than most anything else you’ve seen on a big screen in the last decade, and one has to wonder this: If he wasn’t sharing screen time with Day-Lewis, would he have gained even the slightest bit more recognition when it came to awards season? We’ll never know for sure, but no matter: Day-Lewis’ Plainview rightfully dominated 2007’s trophy shows and if nothing else, his victories served as constant reminders to movie fans that they needed to eventually, no matter what, see this thing at some point (and it worked. “There Will Be Blood” brought in more than $75 million at the box office). If “My Left Foot” was his arrival and “Lincoln” was his victory lap, this film would be Daniel Day-Lewis in his prime. It’s a can’t miss. Make the time. Be amazed.

4. “50 First Dates” – We go from the sublime to the ridiculous. Trust me when I say that I do not like Adam Sandler movies (with some very rare exceptions). Actually, “do not like” is mild. I’d go with “hate” or “despise” or … well, you get it. Even more obnoxious are the movies in which he tries to be funny, which by my calculation happens to be about 95 percent of the time. Still, there’s something sweet about this predictable yet warm love story that highlights precisely how frustrating trying to date somebody with amnesia can be. It got knocked around for its crude humor, sure, but … this is an Adam Sandler movie, remember. That’s like criticizing Quentin Tarantino movies for being too graphic. The thing’s secret weapon is the chemistry between Sandler and his leading lady, Drew Barrymore. She’s as easy-going as they come and her presence somehow forces a sentimentality out of Sandler that serves him well when positioned against the requisite middle-school humor and also-ran jokes. The best part? Check out the flick’s soundtrack. Maybe the best set of songs accompanying a rom-com ever, it features famous people covering other famous people’s songs in a reggae-ed out manner. Even after the novelty wears off, there’s some pretty great stuff in there (Ziggy Marley’s “Drive” is the quintessential version of that classic … and it’s not like Ric Ocasek didn’t know what he was doing, either). It’s mindless. It’s fun. It’s a tolerable Adam Sandler. And it’s set in Hawaii. As the weather becomes colder and colder, this could take you back to a time when temperatures were still warm and the summer seemed so promising. Sometimes we need a light narrative. “50 First Dates” is a feather.

5. “Arbitrage” – This is going to go down as one of the best forgotten movies of 2012, mark my words. Richard Gere isn’t good; he’s great, and as the plot continues to twist and turn and twist and turn, you can’t help but be sucked into everything that’s going on in front of you. He hasn’t been in all that many memorable movies as of late, but this role allows him to spread his wings with grace and ambiguity, two essential elements for a great performance. I won’t say much more because I don’t want to give a thing away, but this one’s a lot of fun. Have a look …