The world around us is on fire as of late which makes me think that it is appropriate to speak about the opera Faust.

The story of Faust has been told by both dramatists and composers. Marlowe and Goethe wrote great plays on the subject not to mention some thirty lesser dramatists who wrote lesser plays. Wagner composed a Faust Overture and Liszt did a cantata, Berlioz and Boito did operas but it is Charles Gounod that is easily the most popular and in many ways the best.

Faust is an opera in five acts by Charles Gounod, based more closely on the three part tragedy of the same name by the German poet Goethe. Its theme is that of the old German scientist-philosopher who sells his soul to Mephistopheles (the embodiment of the Devil) in return for wealth, power and youth.

The transformed Faust is outside a tavern, at the fairground where a crowd of people gather joined by Valentine a soldier and brother of Marguerite, and Siebel in love with Marguerite. Faust takes advantage of the distraction that Mephistopheles creates with Valentine and Siebel and escorts Marguerite as she leaves the church. Faust sets a box of jewels on the step of her house in order to win her over. Shortly after, Faust hears Marguerites confession of love and rushed to her.

In the fourth act Marguerite has been deserted. In church Mephistopheles reminds her of her sin, urging her despair. In front of her house Faust and Mephistopheles provokes Valentine, who is within, and Faust kills him. He dies cursing his sister.

Gounod’s Faust is laden with beautiful music and stirring ensembles and some unbelievable arias. Some critics believe that Gounod turns his characters into stereotypes with music to match. I disagree. This melodious opera has been ensnaring audiences since its 1859 Paris premiere, but listen and judge for yourself. 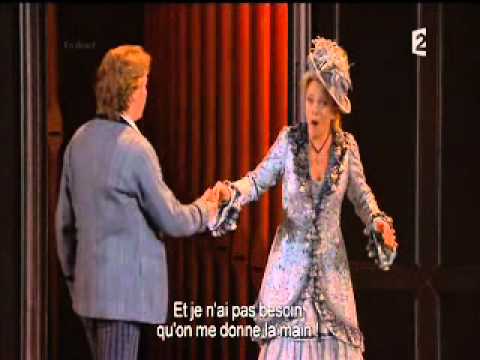