February, oh February. You are the month of love, sure, but more importantly, you are the month of Oscar, the shiny gold man for which Anne Hathaway has been pining now for months. You begin to show us some promise of longer days and warmer temperatures, and you are the final line of defense before the insanity of March Madness begins. The shortest month of the year, you are without question the easiest month to put up with.

And I mean that in the most flattering of ways, of course.

As for this particular February’s set of picks, we focus on a slew of films that … could never touch Academy Award glory. Take that, Oscar! That will teach you to never snub Kathryn Bigelow!

Of the five snub-tacular selections, we have one completely dismissed Jason Bateman-starring flick that has already landed in $5 movie bins everywhere, the second-best movie of 2012, Gene Hackman’s best moment on a screen (which, in all fairness, was a movie awarded with three Oscar nominations), Adam Sandler being angry and quite possibly Woody Allen’s most polarizing piece of work to date. How’s that for appointment-blog-reading? How. Is. It?

So, behold the following five picks for the month of February, a time when the cold weather simply becomes annoying and those little candy hearts that nobody actually likes to eat start popping up at all our workplaces. I’m making the shape of a heart with my fingers now. Promise.

1. “Take This Waltz” — Sarah Polley has been up to the plate as a director two times now. Both times, she has hit two monstrous grand slams over the center-field wall. The first of which, “Away From Her,” is still the single saddest movie I’ve ever seen, and it will forever be the exact thing I want to throw in the DVD player when the lights are low and the loneliness takes over. The second of which, “Take This Waltz,” would have been my favorite movie of 2012 (I know, I know — it was released in Canada in 2011, but who’s counting?) had “The Master” waited a few months to be unleashed. I can’t get enough of Michelle Williams as it is, and this tiny indie flick might just be her most fluid performance to date. It’s the quintessential movie for the type of romantic culture in which we currently live, and it’s the kind of thing that probably won’t be recognized as such for years. It’s a less aggressive “Blue Valentine” that could even be categorized as a more accurate depiction of what these two movies actually try to confront. Subtle. Honest. Complicated. Sad. Profane. True. And, most importantly, it even makes Seth Rogen easier to take (maybe the film’s largest victory). You won’t find a more marinated move in 2012. Forget Valentine’s Day — this is what you should be watching while pondering romance in February.

2. “The Conversation” — Yeah, Francis Ford Coppola won an Oscar for 1974’s slate of films … but sadly it was for the second installment of his “Godfather” trilogy. No matter. This is still one of the most haunting movies one could ever dream of coming across. Gene Hackman has never been better as Harry Caul, an expert of surveillance who is as insulated as those $4,000 winter coats you see people with tacky haircuts wear around town. He is so meticulous in his ways that he could never allow himself to slip up at his demanding and intricate job … or does he? You’ll have you find out for yourself (bonus points for the saxophone!). Legend has it that Coppola once said this was his favorite movie he ever concocted and Hackman once said it was his favorite performance — and it’s not like these guys don’t know what they’re talking about. If you get a couple hours and you like a good psychological thriller with a hint of spy obsession, you won’t be able to spend your time in more constructive or fascinating way.

3. “The Switch” — OK. I can’t give you a good reason for this. I just can’t. So I won’t. I’ll simply concede that I had precisely zero expectation for this thing when I went into it, and I was pleasantly surprised. But, hey — I love Jason Bateman and I would watch Jennifer Aniston fold laundry. So, there. Take that for what it’s worth. Still, this is a funny-enough little ditty that profiles a somewhat complicated scenario, and yes, it gets uncomfortable. So, what the heck — turn it on, go in the kitchen and make some dinner. If it’s good enough to grab your attention, turn the stove off, pour a glass of wine and settle in. No harm in that, right?

4. “Punch-Drunk Love” — Paul Thomas Anderson sure knows what he’s doing, doesn’t he? Much like “The Master” and “There Will Be Blood,” this is the exact type of film that will stick with you for days. His style celebrates ambiguity and often veers into the world of bizarre, but here, he managed to pull a performance out of Adam Sandler that no one has been able to do since, and after seeing how well “That’s My Boy” did, it wouldn’t be unfair to assume that it’s a performance that no one will ever be able to pull out of him again. Philip Seymour Hoffman pops in for an always-memorable (though short) stint as the film’s de-facto bad guy. And if none of that sounds good enough, Jon Brion wrote a fantastic soundtrack that helps paint each moment in the loud colors it’s clear the director desired. Even better: The thing only runs about 90 minutes. So, forget Anderson’s other marathons. Here, you’re in, you’re out, and that’s it. Give it five minutes and you won’t be able to move from the couch. I swear.

5. “Stardust Memories” — From what I gather, if you love Woody Allen, you either find this brilliant, or you find this boring. Me? I’ll roll with the former. Maybe my favorite forgotten Woody Allen film, “Stardust Memories” is covered in more self-doubt than a sold-out stop on a Warped Tour. “This is what happens with celebrities: One day people love you; the next day they want to kill you,” Allen said around the time this was released. Yeah, it’s neurotic and yeah, it’s pretentious (you don’t need me to tell you that this was his tribute to Federico Fellini’s “8½,” right?). But man, is it griping. Have a look … 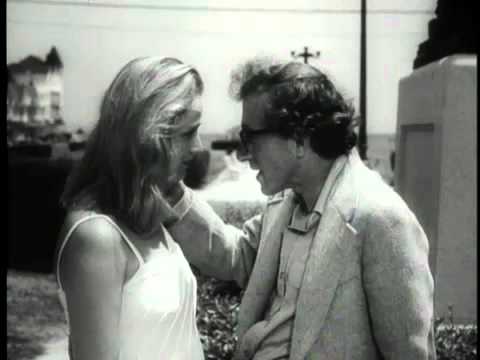