Taking stills from TV shows and movies to give them funny captions is one of the most basic form of meme. In this post I will be showing a collection of memes derived from stills of the show Futurama.

The “Why not Zoiedberg?” is a meme which has a line directly from the show, a trend among these memes. It features character Zoiedberg offering himself as an option for… well almost anything. There are many examples of modifications to this meme, such as: computer wallpaper, Pokemon (using a play on words with Wynaut sounding like ‘why not’), Facebook cover picture, background character, and even as a Pony version of the meme. 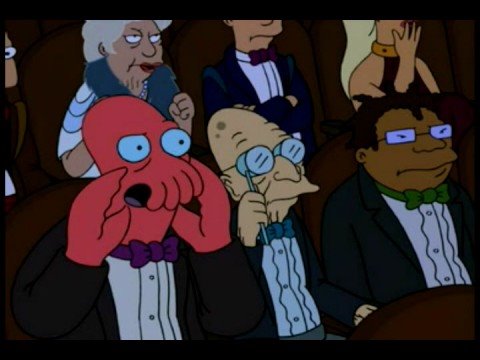 This meme is meant to shame creators of poor content. Notable examples to be used as reaction images include: Your meme is bad, Your comment is bad, and Your grammar is bad.

One of the most notable Futurama memes is the “shut up and take my money” meme, featuring the character Fry and his line directly from the scene with the still image. This meme is mostly used as a reaction image (an image used to express emotion towards a topic) such as in this instance. It can also be modified to become a self-contained joke or reaction specific to a franchise, often including the form of currency used in that game/show. Videogame examples: Pokemon, Legend of Zelda, Skyrim, Fallout. TV show examples: My Little Pony Friendship is Magic and Dragon Ball Z.

Another popular Futurama meme features Fry, the “not sure if ___ or ___” meme. Here is an example of it being used in reaction to something else from the internet, in this case a Facebook post. This meme comes with edited variations as well, like erasing Fry’s shirt and adding in a shower head, or this Pokemon-themed edit and joke, though the blanks in the meme leave it very open to editing just within the text. It even spawned memes of characters with similar expressions using the same text formula. This meme became so popular that the official commercials for Futurama actually began to feature versions of it, like this one.

The next meme is of character Professor Farnsworth delivering his catchphrase “good news everyone”, which can be used stand alone imagee to preface following text or can be used before another line of text at the bottom of the ‘good news’ to which the meme creator was referring.

“ALL GLORY TO THE HYPNOTOAD” is a rather simple meme, often not featuring more than the slogan or the image of the famed Hypnotoad, a toad with hypnotic powers, which wishes only for everyone in the Futurama series to stare at it on their TV and repeat its slogan. Its purpose are, as ever, unclear, but I feel that it and the people who post it simply wish for some small positive attention.