There’s nothing quite like snow skiing.  Putting on your snow suit and jacket (I’m partial to The North Face), grabbing your favorite goggles (for me, Oakley) and strapping on your favorite pair of skis (still searching for my favorite brand), you know that when the final button is snapped it’s time to take on the mountain.

As you ride the lift to the top and feel the cold wind blow across your face, it’s hard not to look out and be in awe of the landscape that’s around you – or rather, below you.  The peace that you feel as you ascend to the top of the mountain is quickly redirected to the excitement of returning to the bottom on your own steam.

Swerving around trees, hearing your skis cut through the snow and ice as you carve your path to the bottom – it’s a very powerful and liberating experience that everyone should enjoy.

Therein lies the problem: not everyone can experience the rush of skiing whenever they want.  Whether it’s due to weather conditions, the price tag associated with owning the “proper” gear, physical limitations or simply due to the time of year; skiing is not a year-round sport if don’t have the funds, etc. to travel around the world to ski.

But what if there was an alternative?  What if you could experience skiing to a finite detail, for FREE, like never before?  Enter SNOW.

No, I’m not referring to the stuff you actually ski on.  I’m talking about the new game from Poppermost Productions.

Big things can definitely come in small packages.  Poppermost Productions, a three-person game development company that calls Stockholm, Sweden home, is headed up by Mr. Alexander Bergendahl.  In a recent interview that I conducted with him, he provided some insight on the company and what it has taken to create their new game.

In regards to the company itself, Bergendahl explained how the work is distributed between the trio:

“Markus handles all of the art design and creation; Filip handles all of the code; and I do all the other tasks; like business, marketing and QA (quality assurance).  We all have interests in each other’s work, so we like to give input whenever we can.”

Sounds like a streamlined, collaborative effort that’s ideal for an indie game development company.  So then what about the game itself.  What exactly is SNOW?

“SNOW is the first free-to-play, open-world skiing and snowboarding game.”

Other games that have come before SNOW (like SSX, etc.) have provided an over-the-top, adrenaline-filled experience that has been “linear”; i.e., you have a set number of courses to travel that you must ski or snowboard in order to see how many tricks you can do or how fast you can get down the mountain.  With SNOW, that’s not necessarily the case.

Being the first, open-world skiing game, players will have the option to traverse the mountain in an almost infinite number of ways.  And to top it all off, the physics added into the game take the over-the-top physics seen in other games down a notch in order to make the game feel that much more real.

Along with increased realism, the sandbox or “open-world” is becoming more of a staple in the industry.

This (open-world game type) is not new, of course.  Titles like Grand Theft Auto 5, Just Cause 2, The Elder Scrolls V: Skyrim, The Legend of Zelda: The Windwaker HD are all open-world titles that encourage players to tailor their gameplay experience to how they want to play.  SNOW doesn’t deviate from this level of freedom:

“I think an open-world experience is the only way to make a game like this.  The sport (of skiing) fits perfectly into a massive environment, and as the technology to create such an environment is more accessible these days it was a no-brainer for us.”

It’s taken Poppermost over a year and a half to get to this point in the game’s development.  But when you weigh in the depth of detail in every aspect of the game (environment, apparel, dynamic effects and so forth), it’s pretty impressive what they have been able to accomplish.

So then besides being the first, open-world skiing game, why exactly is SNOW a big deal?  I believe that it’s due to the authenticity in each aspect to the game.  Bergendahl has this to say about authenticity with SNOW:

“We decided early on that we would focus on creating mountains that would look authentic, but that would not limit our creativity.  In the end we have to make sure the user is always presented with a fun and challenging terrain – trying to recreate a real mountain wouldn’t allow us to do that.”

Tailoring most games to the community is key.  No matter what size your game is (indie to triple-A), if you don’t listen to your future customers it’s not going to be a success – especially in the social media-oriented society that we live in today where someone can voice their opinion to thousands of people in only a few seconds.

On the other hand, besides the rush of carving down the mountain on your skis in near-realistic fashion, there is another aspect to the game that will further cement its presence in the skiing world: branding.

Those that play SNOW that haven’t skied before or that have been skiing for years will be able to outfit their character in real-world styles that are to their liking.  Thanks to the ever-expanding list of brands that are backing SNOW, players will be able to try out the latest styles before they hit the stores.  Over twelve of the world’s biggest ski and snowboard apparel companies (including Red Bull, POC, K2, Head and Scott Sports) are already backing the game, and more are on the way.

So before you point your skis towards to the bottom and push off for another ride, you will be able to customize your skis, boots, pants, jacket, helmet, goggles and chewing gum (ok, not your chewing gum) with the various brands that are supporting the game.

>>OUT OF THE BOX, DOWN THE MOUNTAIN

Besides the talented team behind SNOW, another key element that has brought the game to life is Crytek’s CRYENGINE.

CRYENGINE is an award-winning game development technology that provides photo-realistic environments, characters and dynamic effects that enable players to see and interact with the game world almost as if it were real.

Asking Bergendahl about the team’s choice to use CRYENGINE for their latest endeavor, he responded accordingly:

“CRYENGINE is the only engine that could power an experience like ours.  Out of the box we were able to create a massive open-world with breathtaking graphics and also had a bunch of great tech at our disposal like CRYENGINE’s time-of-day tools.  This is really important for us as we are a small team and did not want to spend much time to get the core experience up-and-running.”

As is the case with any (indie) development company, having the tools to expedite the development processes to save time and money is vital to the life of the game and to the company itself.  Choosing this engine was definitely a very smart move for the crew at Poppermost.

Once the game is made available via “Early Access” on Steam in mid October, 2013, Poppermost has designed the game to not only allow players to take on the mountain by themselves, they have also incorporated events and challenges to keep the thrill alive:

“We are designing SNOW to be ‘socially competitive’ – which means that we will eventually connect the game back to social media (Facebook, Twitter, etc.) so you can brag about your wins to your friends.  We will also have multiplayer and a full feature-set to go along with it so players can challenge their friends on the mountain.”

Whether you are physically on the slopes or enjoying the sport on your gaming device, skiing is an activity that tests your reflexes constantly as you navigate the terrain.  But if you can’t eventually play and compete with your friends, things tend to get repetitive after a while no matter how many variations you can discover for reaching the bottom of the course.  Thankfully, Poppermost realized this early and it will be a feature of the game at launch.

Emphasizing the fact that SNOW is free-to-play is all fine and good.  But to ignore the varying opinions of this genre (free-to-play) would be foolish.  So I asked Bergendahl about why Poppermost chose to make SNOW free-to-play:

“We understand that the end-user wants to explore and try out the mechanics of the game without constantly being reminded that they haven’t paid at all for the game.  So we’re not creating any pay-walls or ‘energy’ mechanics to limit the player.  Instead, players who want a deeper experience can spend their money on player customization and competitive gameplay like our events and challenges.”

Recently Plants vs. Zombies 2 (PvZ-2) was released on iOS devices; i.e., iPad, iPhone and iPod Touch.  Prior to it’s released, PopCap notified the public that even though the game was free-to-play and that in-game purchases would be available to players, anyone who plays PvZ-2 can progress through it without spending a dime.

Like PopCap, Poppermost has adopted this true, free-to-play model that will enable players to enjoy the game without being forced to spend dollar one.  This is the true meaning of free-to-play as in-game purchases are optional and only add-to the experience rather than overpowering it.

>>COMING TO PC NEAR YOU

Earlier access to SNOW is now set for Thursday, October 10, 2013 on Steam.  So as you wait to download the game next week, here’s the latest gameplay video to show you some of what you will be able to do in the game: 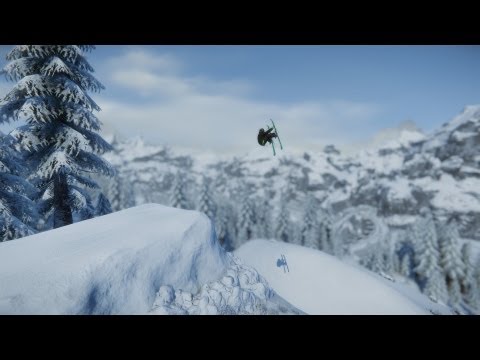 Thank you for reading and please follow Brooks on Twitter for more links to articles on the personal technology and videogame industries.