What exactly is a ‘life hack’?

Well according to Urban Dictionary, a life hack is “A tool or technique that makes some aspect of one’s life easier or more efficient”. These tips and tricks have been around for a while, but now that captioning images and sharing them online has become popular, it makes sense that life hacks would enter the meme world. Lifehacks range from the obviously doable, like “Put pancake mix in a ketchup bottle for a no-mess experience” to the difficult, “Bacon Pancakes“, and even to questionable “two bowls in the microwave“. Some even pose interesting dilemmas, such as “Velcro on Common Items” because while it is useful to be able to have all of those things right by your bedside, do you really want to feel velcro on the back of your phone every time you hold it? Probably not. Cd case as a bagel holder might work, but I have my concerns about the size of the bagel hole relative to the side of the spindle hole. Using a can-opener to open things sealed in plastic might work, but then again so do scissors.

Here are the first 6 life hacks I saw at the start of the trend:

2) Core strawberries with a straw

3) Oreo on a fork to dip it in milk easier

Some of my 3 favorite, which I have tested and now swear by:

1) How to put more ketchup in the paper cup

3) Peel a banana the better way

There are many more life hacks out there, but some don’t really seem like HACKS, they seem like either common sense or stupid tricks that wouldn’t really help all that much. Like, seriously, putting small papers in a plastic bag (oh with some cardboard) that’s common sense, not really a revolutionary ‘hack’. It isn’t surprising that some people have this reaction. All that being  said, some of these life hacks really do work, so lets view some tests! 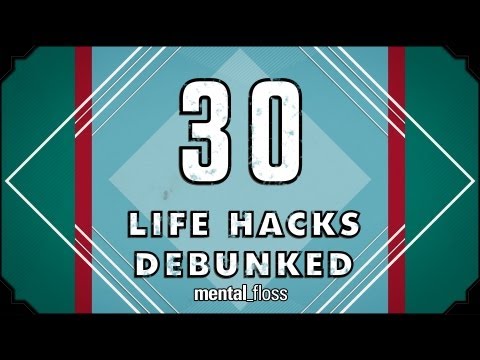 Here are some life hack lists “for everyone” and “for girls“. As typical of life hack lists, some of these are interesting and useful, some are reposts, and some are just dumb. Check them out and decide for yourself!