The New Year has only just begun and everywhere you look someone is publishing their “Best of 2013” item or list.  The best cars, the best videogames, the best cheese – it’s funny how so many things are “the best” at this time of year.

Not to completely follow this trend, although I do admit to putting my own spin on the whole “best of” thing, I wanted to write about a game that intrigued me from the first moment that I played it.  The game that I’m talking about is an “episodic game” for PC entitled Kentucky Route Zero (KRZ).  Here is the trailer for the game: 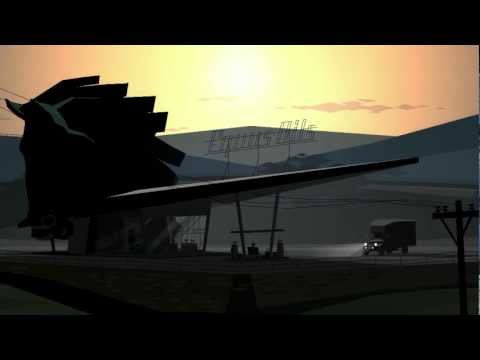 Created by Jake Elliott and Tamas Kemenczy of the Chicago, Illinois – based indie game development company Cardboard Computer, KRZ feels like you’re playing through an old story that you would tell while sitting with friends around the campfire.

“The sun was just beginning to set behind an old gas station just off the highway.  A delivery truck pulls up.  An old man, followed by his dog, climbs out to ask directions.”

Granted this is my own interpretation of the beginning of the game, but everything about the first scene, and every scene thereafter, felt so vivid that it held my attention until there wasn’t anymore game to play hours later.

So what’s an “episodic game”?

An episodic game is one that is broken down into multiple parts where the decisions that you make in one cascade to the next and so forth.  For example, if you are playing a game where you are a Superhero and you choose to save one person over another, the person that you save will show up in the next “episode” of the game and the person that you left in the volcano (respectively) will not.

And now back to KRZ.

Back in February, 2011, over 200 backers gave funds to the duo through the crowd-funding website, Kickstarter.com, in order to aid them in funding their game.  Calling it “a magic realist adventure game”, the campaign went on to raise over $8,500 – with their original goal being $6,500.  In the grand scheme of crowd-funded indie games, this wasn’t a large amount of funding.  But what followed was anything but small change.

Transitioning from their roles as Web Developers, Elliott and Kemenczy took the leap to create KRZ.

“We use theatre as a model for constructing the scenes (in KRZ) and staging the characters in them, inspired by set designers like Beowulf Borritt.”

An old cabin. What could be inside?

As the stage inspired them to shape their scenes, I finally understood why this game feels like a journey that, in part, is like you’re directing a tragic stage play all while you’re on an adventure into an alternate universe that you would only see in your dreams.

When approached about their company and about KRZ, I discovered something very admirable about this small group of indie developers – their respect for not only great games, but also for the literary works that served as an inspiration for their five-part story.

“Magical realism, especially Gabriel García Márquez, has been an important touchstone for us in the way it blends the fantastic and the mundane – and ever-present social critique.  Also southern gothic fiction, like Flannery O’Connor, Carson McCullers, Tennessee Williams, and William Faulkner.  Flannery O’Connor was a really important starting point for the tone of the game — her stories charge everyday occurrences with a sort of terrifying divine presence.  It’s this liminal space between the mundane and the magical.”

Searching for the Zero.

Garcia Marquez, O’Connor, McCullers, Williams, Faulkner – all heavy hitters in their respective craft.  But the inspiration behind KRZ didn’t stop there.

“We really like some of the more recent, very personal or confessional games made in Twine, like Merritt Kopas’ ‘Conversations With My Mother‘.  Also text adventures, like Adam Cadre’s ‘Photopia‘. And of course we’ve been playing point-and-click adventure games like the LucasArts/Sierra stuff (The Secrets of Monkey Island, Loom, etc.) for many years.  There’s also certainly some inspiration in there from Eric Chahi’s 1991 masterpiece ‘Another World‘.”

So when you blend all of these inspirations together, along with Cardboard Computer’s previous experience with creating, “…software art and experimental performances & installations, in galleries, clubs and DIY art spaces,” you get the interactive adventure of KRZ.

Two episodes (Acts I and II) have already been released on Steam, and three more are on the way this year (2014).  So before the next three Acts come out, I highly recommend taking the leap and going on the adventure that is unlike any that you’ve experienced.  Come on, take a ride to the Zero.

Thank you for reading.  Follow Brooks on Twitter for more links to articles about the personal technology and interactive entertainment industries.