Well, thank you, Roku. Your never-ending brilliance afforded me the ability to watch the Golden Globes last night. And while my bedtime is typically far too early for me to fully enjoy such pomp and circumstance, I also managed to pick my retirement spot correctly: I gave into my battle with sleep precisely two-and-a-half minutes after Ms. Robin Wright took home the first-ever trophy for an Internet TV star. What say you, Colin Mann of Advanced Television?

“Netflix has become the first original online programming service to earn a major television award, with Robin Wright being named Best Actress in a Drama Television Series at the Golden Globes for her performance in Netflix’s political drama series, House of Cards,” he wrote a few hours ago. “Netflix in September 2013 became the first online television provider to win a Primetime Emmy with David Fincher garnering Outstanding Directing for a Drama Series for the pilot episode of House of Cards.”

Wright looked stunned when they called her name. She then proceeded to offer up an endearingly rambling speech that cited Merritt Wever’s greatest-ever Emmy moment that occurred a few months ago. Kevin Spacey smiled sincerely. And the greatest haircut in all of television — Internet or not — then walked off the stage.

Calling it a huge moment in the currently-being-written Tale of Web TV would be a large understatement. Say what you want about how silly, obnoxious or unfair the Golden Globes are, but you can’t deny that it’s the second-most-important award in all of TV Land. Winning one of the major trophies (I love you, Fincher, but Outstanding Directing isn’t quite “major”) in one of the major competitions can only mean great things for the medium as a whole. You can argue otherwise. You’d be a fool.

Why? Because this completely legitimizes the product. How many people have heard of this weird thing that something called Netflix is doing and said, “I should check that out someday”? A lot. And then, by proxy, how many people kept saying, “I’ll get to it, but I just don’t have the time or money today”? A boatload.

Now, those people understand that cutting the cord really is a viable option when considering cable television packages.

I’ve been saying here for months (almost a year!) that Wright’s Claire Underwood offers some of the most mesmerizing female performances I’ve ever seen anywhere. She’s stoic, sublte, powerful and respected. Like the true mark of a great character, you simply can’t imagine another woman playing that role. It’s a certain, special kind of personality that goes into her genius. For that, she’s now (rightfully) been rewarded.

As for what’s next, we can only imagine. The show returns to the World Wide Internet exactly one month from tomorrow (Happy Valentine’s Day!) and we’ll see how well its second run holds up. It’ll be a first — we’ve all consumed a whole bunch of Season Ones in the last year, but we have yet to figure out if a follow-up act will be as well-received. That said, it’s mighty hard to imagine the series faltering as long as Wright’s mysteriously distant Claire Underwood is around.

“Enjoy it while it lasts, Netflix,” Amy Poehler quipped at one point last night. “You’re not going to feel so smug in a few years when Snapchat is up here accepting for Best Drama.”

That’s funny. And who’s to say that someday, it can’t also be true? 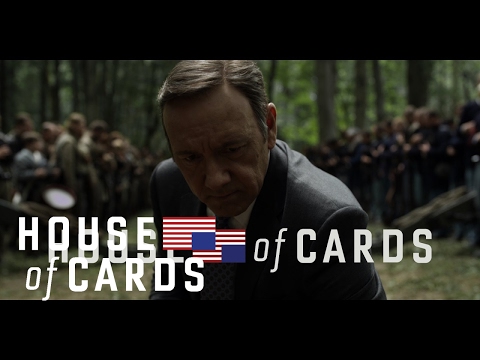