I’ve been away from my Gaming Confessions Blog since November and now, I’m back after a LONG hiatus folks! So, I want to delve on a topic in which has been on my mind for a while. I’d like to call it the Bait & Switch. The classic definition of this is to deceive a person or an audience with either an object or idea which initially appears to be glamorous, exquisite or  of jaw-dropping quality with something of the opposite. For example, a Magician uses Bait and Switch tactics to turn a Diamond into an ordinary rock. The same thing applies to video gaming as well. One big example of this Aliens: Colonial Marines. The initial gameplay footage trailer stunned audiences near and far and gamers couldn’t wait to get their hands on it. Initial gameplay impressions were also very positive as well; with the atmospheric tension and lighting being the game’s strong points. Fast forward to release day and the game is a buggy, broken mess. Was the game rushed? Did the developers have enough time to work on it? Did the game direction change during development? Who knows. That’s why I try not to pre-order games to begin with; to avoid possible disappointment at the cost of some unnecessary free items.

Most recently, one title comes to  mind in terms of the Bait & Switch: Dark Souls 2.

I’ll start with Dark Souls 2 first. DS2 is an excellent game. It lives up to its predecessor while adding & tweaking the core gameplay simultaneously. When gameplay of Dark Souls 2 initially surfaced, many praises went to the game’s dynamic lighting and graphical textures. The contrast of colors were remarkable and the graphics were very detailed; more than the other Souls game and also one of the best in it’s genre. Now, when you play the game, you can definitely see the difference. It’s disappointing that the graphics got a downgrade but the gameplay is quite enjoyable; unlike Aliens: Colonial Marines. Cue the YouTube video for the Dark Souls 2 and Aliens: Colonial Marines example. 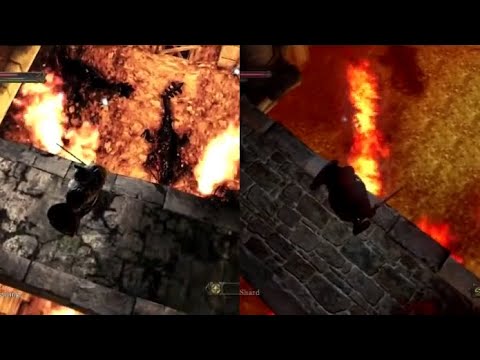 In the case of Dark Souls 2, the developers tried to get the game to look as best as it can but it wasn’t possible without the game yielding to issues. Thus, the gameplay is more important in this case. Namco Bandai issued a PR statement about this to soften the blow about the graphical concerns. At least the company knew this was an issue. I can’t say the same thing about Aliens: Colonial Marines. Instead of Gearbox Software saying they developed the game, it was actually outsourced to TimeGate studios; which explains the graphical disparities in the game. In other words, game looks and plays like crap and Gearbox Software lied about their role in the development in the game. The game received many negative reviews and those who purchased the game were rightfully angry for being misled by the developer. This is not how you treat your customers.

Moral of the story: Use caution when buying games. Better yet, don’t bother pre-ordering. You don’t know what you’ll get yourself into and your money would have been wasted for nothing.