I can only imagine what was going through the minds of the thousands of men and women who have lived and died only to bring us some of the world’s most provocative, enduring and cherished pieces of art.  Regardless of age, gender or country of origin, their work has brought us countless sculptures, iconic buildings, stories, plays and even musicals.  Now that I think about it more, I guess that’s part of the allure – the not-knowing – because that adds another level of intrigue to the art itself.

But what about today’s artists and how their work is distributed around the work in a single click?  Obviously with technology we have a lot more tools with which to create art and share it so that it can resonate with countless individuals that may have never experienced without the internet.  So does this level of availability take away from the allure of modern, technology-based art?  Not, in my opinion, when it comes to a certain indie developer that has created something totally original with their latest mobile game.

Entitled Tengami, from the UK / Japan – based, indie game development company Nyamyam, I sat down with the two creators of the company, Jennifer Schneidereit (JS) and Phil Tossell (PT), to find out more about the game.  But when I looked at my questions, all I could do was to wonder about the name of their company.

W2W: What is ‘Nyamyam’, what does the name mean and how did the company come to be?

JS: Phil and I founded Nyamyam in late 2010.  Our goal with Nyamyam was to create beautifully crafted games that have meaning to us as creators, but also to bring joy and wonder into players’ lives.  Shortly after starting the company Ryo Agarie joined us.  It is best to think of “Nyamyam” as a sound, rather than a word with a specific meaning.  If you say “Nyamyam” it sounds rather cute and fun.  It also sounds a little bit like ‘yummie’ or delicious.

Of all the times when I have asked about the origins of a company, this was a first to hear that I should think of the company name more as a sound than a word.  Pretty cool, actually.  So we continued.

W2W: How did you get into making games for a living?

JS: After school, I studied Computer Science with the goal of joining the games industry as a programmer.  After graduation I went to Tokyo, Japan to work for a Japanese company called Acquire – best known for their ‘Tenchu’ and ‘Way of the Samurai’ series.

PT: I first got into games when my dad bought my brother and I a Spectrum 48 when I was about 6 years old.  Since then I’ve played games continuously and it became my goal to eventually create them.  I studied for a Computer Science degree and after graduating was fortunate enough to get a job at Rare (makers of ‘Kinect Sports Rivals’) where I worked for 14 years.

Both with Computer Science backgrounds, but each coming from much different regions of the world in regards to where they got their start in the video game industry, I then asked about where the idea came from for their first title.

W2W: For those that haven’t seen or experienced the game yet, what is Tengami?

JS: Tengami is an atmospheric adventure game that takes place inside a Japanese pop-up book.  It is a very serene and calm game, in which you explore a very beautiful landscape within a pop-up book.  You come across puzzles and obstacles that you solve by flipping, folding, sliding and pulling parts of the pop-up book world.

As the beauty of this game cannot be conveyed completely in text, the following is the gameplay trailer for the title: 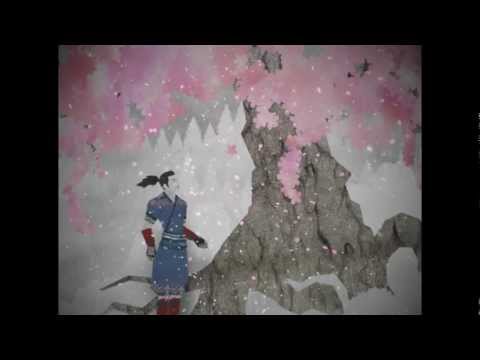 (Oh and if you’re feeling creative after watching the trailer, here is a activity book where you can actually create a part of the game out of regular paper.)

With an understanding of “what” the game is, I inquired further as to “why” and “how”; i.e., why create a Japanese, pop-up book game and how were they able to accomplish such an effort.

W2W: Why create a digital pop-up book which is inspired by traditional Japanese arts and crafts?

JS: When we started to develop the idea of a game inside a pop-up book, we looked at what countries do interesting things with paper.  Very quickly we set on Japan, as it has a long history of hand making paper, as well as, a rich selection of various paper types.  On top of that everyone at Nyamyam is a big fan of traditional Japan, and so we decided to go for a Japanese themed pop-up book.

W2W: As I come to understand it, the game has been in development for over three years.  Can you provide some insight as to what you’ve had to endure to bring the game to life?

JS: It’s been a really long, hard journey with many ups-and-downs.  The first year of development was entirely dedicated to learning how to make pop-ups with paper, scissors and glue, and developing a digital tool kit that would allow us to create authentically folding digital pop-ups.  During that first year there was a lot of uncertainty about whether we would actually be able to create digital pop-ups. We had a number of crisis moments where we considered throwing it all in, but we always found a way through.

A waterfall of red and white shadows the main character.

As with any medium that is taken from the physical world and into the digital, it was reassuring of the quality of the final game that the team took the time to understand actual Japanese paper and folding techniques – something that not everyone, including myself, are very good at doing.  But to see the final product, Nyamyam has definitely impacted the gaming community with what they have achieved.

W2W: How has the gaming community affected the development of the game (if at all)?

JS: During the 3 years of development, we took Tengami to numerous shows like Rezzed, PAX and Eurogamer in order to play-test the game and find usability problems.  Feedback and observations from these then fed back into iterative improvements within the game.  We were always really careful though to ensure that play-testing was additive to the fundamental design and not something that overtook the core concepts.

Other than social media advertising, the most powerful way to get your game out there is to get it in the hands of consumers as soon as possible.  Play-testing helps with understanding whether a certain feature of a game (or the game as a whole) works or doesn’t work early on.  Having this data is invaluable when it comes to developing the game into it’s final version.

Game services like Steam constantly offer “Early Access” versions of games so that people can play titles while they are being developed.  Don’t Starve is a great example of this and I recommend it because, although it’s theme (parents, be warned) is centered around survival, it is endless fun.

Something that I really enjoyed about talking to the folks at Nyamyam is that throughout what they have endured to bring Tengami to life, they’ve created something original.  In doing so, they’ve created an experience that adheres to their original vision – which is, especially for an indie developer, something that is rather difficult to do.

A lone wolf howls at the paper moon.

So what’s next for Nyamyam and Tengami?  Well from what Jennifer and Phil conveyed to me, look for more features to be added to the game, as well as, more platforms on which to play it in the months ahead.  A pop-up book that is as interactive and serene as Tengami would be a perfect title for such motion-based systems as the Wii-U.  So keep an eye out for it on both the Wii-U and (PC) desktop.

To read more articles and interviews from the Personal Technology and Interactive Entertainment industries, follow Brooks on Twitter.