Next-gen consoles are providing THE platform for developers to publish large – and small – scale games like never before.  Games like The Elder Scrolls Online, Infamous: Second Son and even the newly announced The Last of Us – Remastered are so lush and expansive that I can honestly say that we have finally come to a point in the industry where games are starting to live up to the expectations of gamers.

But there’s another genre of game that has become a go-to for an enjoyable, always unique gaming experience: “The Dungeon Crawler”.

Why is it ‘always unique’ you ask?  It’s because the levels are NEVER the same or ‘roguelike’; i.e., they are characterized by randomly-generated levels, permanent death of characters and tile-based graphics.

One of the latest additions to this genre is a game that is currently seeking funding on Kickstarter.com.  Entitled The Hero Trap, it is being made by the creative team at SMASHWORX.  I was fortunate enough to sit down with it’s Creative Director, Mr. Nikita Mikros, and this is what we discussed:

W2W: What is your name and what do you do for a living?

A very humble response for someone who has overseen the development of over 10 independent games, as well as, 10 commercial games.  But regardless of his short and sweet answer, I was curious as to how he got into making games for a living.

W2W: How did you get into making games?

NM: Growing up I made a few games on the Apple IIe and Commodore 64 with my brother, John.  I didn’t really think making games was a career option at the time, so in the beginning it was just for fun.  But all that changed when Blizzard’s Warcraft II came out.  I could see how I could be working in the industry making games and how awesome it could be.  So I started working on a new project with my brother entitled Alien Attack.  It was a four-person, space shooter published on the Mac platform (Apple) in 1997.  At the time, publishing to this platform was nowhere near the platform that it is today, but it was a good start and we learned a lot from it.

Start small and work your way up.  Definitely a smart way to get into an industry that is filled with varying levels of developers that, sometimes, shoot way too high too quickly and have to go back to their 9-to-5 jobs.  But as a job, I asked Nik about his game development company, SMASHWORX.

W2W: What is SMASHWORX and how did it come to be?

NM: SMASHWORX is an indie game company in New York City that focuses on games that we’d like to play.  We do a lot of client work with our sister company, Tiny Mantis Entertainment, and that’s great, but the game development work that we do at SMASHWORX is what we build for ourselves.

So then to the elephant (or ‘Hero’ in this case) in the room: The Hero Trap.

W2W: What is The Hero Trap and how did it come to be?

NM: The Hero Trap is a frenetic, roguelike dungeon-crawler that turns many assumptions about roguelikes on their head.  You control up to three heroes at a time, unlike a lot of other games that only enable you to control one.  As it’s tactical decision-making in real time, the main hero that you use is active, or “materialized,” while the other two heroes are in their ghostly form.  Each hero has a unique ability, as well as, their own individual items, stats and health.  This will challenge you as you face many creatures and other obstacles while you make your way through each level. 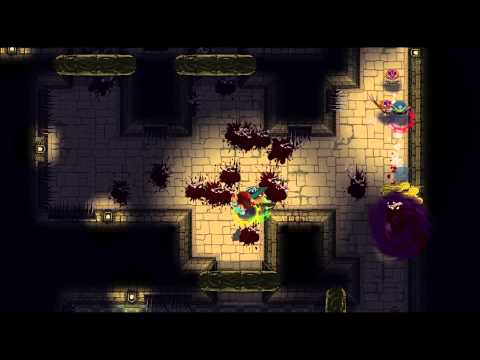 W2W: What is the benefit behind creating a game that has randomly-generated levels?

NM: It’s not all smiles and sunshine, but randomly generated levels do bring more longevity to the game.  The trick is making it feel like a human “could” have created it.

W2W: What was the inspiration behind the game?

NM: For me, Spelunky was a huge inspiration.  It really is THE game that keeps on giving.

W2W: The art style of The Hero Trap is very detailed.  Why go with this style over 16-bit graphics – which a lot of developers are going back to these days?

NM: I’ve always liked pixel art.  But when we started to work on The Hero Trap, we were coming off of a client project that was in a 16-bit art style.  That project was less than ideal in how things went down, so we were a bit tired of that style and wanted to do something new.  What you see with The Hero Trap is the result of that effort.  We couldn’t be happier with the outcome.

Of all of the developers that I’ve interviewed to date, and for as many times as I’ve asked the next question – whether it was about Kickstarter or some other crowd-funding website – I enjoyed Nik’s answer the most because…well, check it out:

W2W: Why use Kickstarter over other crowd-funding websites?

NM: Not sure, to tell the truth.  I don’t know if I’d do it again.  I personally have a lot of mixed feelings about crowdfunding video game projects.  I think many gamers are suspicious of it, and with good reason.

As a player, I’ve backed quite a few projects now and with the exception of one, I haven’t actually gotten any builds.

On the other hand, as a developer it forces you to go into ‘selling’ mode at the beginning of your project.  You provide specific details about the game, and in doing so you are creatively-limited from there on in as to the decisions that are made throughout the remainder of the game’s development.  Not an ideal situation for a developer in any industry.

With all of that said, I think if your team is more ‘marketing’ driven, then crowdfunding a project is a dream come true.  But if you are like us, which is, ‘design’ driven, it’s kind of hell on earth.  That’s why it was so important to me and the team that every bit of in-game footage was real, and not After Effects trickery.  I wanted to make sure that we could deliver on everything promised.

W2W: What’s next for SMASHWORX and The Hero Trap?

NM: The next step after the Kickstarter is finishing the project and then hopefully starting to sell the game.  We’re looking at a lot of options for distribution which is awesome, but personally I’m looking forward to playing it on my PlayStation Vita on my subway commute. 😉

The Hero Trap is in it’s final days of seeking funding through Kickstarter.com and they need your help.  Check out the campaign here, and thank you for your support.

Follow Brooks on Twitter for more links to articles on the personal technology and interactive entertainment industries.