June, oh June. You are hot. You are sweaty. And you are filled with music.

No, but really. To the two-and-a-half of you who might still be reading, it’s imperative to note why there seems to be an extended absence from this blog (as well as a slip-up on our annual upfronts coverage – sad face!). Well, that would be because of this:

The fine folks here at the Frederick News-Post have asked me to start up a new website dedicated solely to Frederick music. Thus, Frederick Playlist, a one-stop shop for podcasts, reviews, Q&As, concert coverage, photos, videos and even a few contests. All of it features local ties, all of it features people you might know. It has a Twitter account. And a Facebook page.

And in order to put all of that together, I had to step away from this fine, tiny corner of the World Wide Internet for a little bit to try and get the train rolling. Rest assured, though, that after this weekend’s launch party events (tonight at Cafe Nola and tomorrow at Olde Towne Tavern — come say hi!), we can finally get back to some good, old-fashioned Internet television.

And what better way to reacquaint ourselves than the monthly feature that continues to sweep the nation (not really), Netflix Pix, the list that offers five suggestions you might consider while perusing the Netflix streaming catalogue. We haven’t missed a month yet, so why stop now?

This month, we have the return of not one, but two — two! — Netflix Original Series. We have an entirely over-hyped horror film by an entirely overrated writer. And, of course, we have two separate 30 For 30 spawns, one about the most fascinating team ever assembled in the NBA, and the other … well, you’ll see.

So, turn on that air conditioner, grab a glass of lemonade and cuddle up with any of the following five picks. Because yes, were are going to take this blog back from the depths of inactivity. WE’RE GOING TO TAKE IT BACK!

1. “Orange Is The New Black” (Season 2) — Well, duh! So, you’ve already devoured the first four episodes of the season by now, haven’t you? You should have. Released today (today!), this second season follows the sleeper-hit-of-the-century’s first run, which Netflix used to solidify its place as the premiere outlet for original streaming content. You can read all I had to say about the first season here. You can read a neat New York Times profile on the ladies here. And, of course, you’ll want watch the trailer to this latest run (again, RELEASED TODAY!) below …

2. “Derek” (Season 2) — And we go from the convicted to the cuddly. Back on Netflix here in the United States is Ricky Gervais’ “Derek,” the nursing home dramedy (or comeda) that will most certainly make you cry, laugh, think and tell all your friends they need to watch “Derek” (enter obligatory link to what I wrote about the first season right … about … here). As for what you can expect, take it from Chris E. Hayner at Zap2it: “The second season of ‘Derek,’ which premieres Friday (May 23) on Netflix, brings a lot of what made Season 1 so special. Its combination of offbeat humor mixed with a dash of heartbreak isn’t something you see in many shows. Is it as compelling the second time around, though? The answer is both yes and no.” Why is that? Well, you’ll either have to head on over to the link or fire up your Streaming Machine to see what it all means. As for me, I have yet to check out the second run (I know, I know: There will be a lot to catch up on once this blog starts up again), but I will say this, at least one more time about the show’s first season: The premiere? You’ll cry. The finale? You’ll cry. And everything else in between? Add a few laughs to the equation. I’m one of those people who think Ricky Gervais is a genius and “Derek” proves why. Kindness is magic, friends. Kindness is magic.

3. “30 For 30: Bad Boys” — I actually caught this one when it premiered on ESPN (thanks, Roku!), and if you are even remotely interested in the round-ball, this is an absolute must-watch. If nothing else, the vintage footage from mid-1980s NBA is as priceless as it gets. Benjamin Morris, over at fivethirtyeight, concocted a wild set of stats on just how “bad” the Bad Boys were in the period chronicled throughout this documentary, and if you get a second or five, check it out. Here’s a snippet: “All six of the seasons after 1986 (Dennis Rodman’s rookie year) are badder than every season prior to 1989 in our data set. Detroit only finished one season below .500, and won two championships in the other seasons.” Whoa. All stats be damned, however, the amount of mysticism around this group of guys will forever go down in the annals of the league as one of the most entertaining. This tiny film profiles it all, from the good, to the bad, to the really, really bad. If you’re looking for something to quench that basketball thirst after the finals end later this month, this thing is certainly worth your time.

4. “The Cabin In The Woods” — I am the Music Review Editor for a website that once released an entire book dedicated to Joss Whedon. Thus, after all the acclaim “The Cabin In The Woods” received a couple years ago, I thought, “Well, what time is better than now to try and see what all the fuss is about?” The result? Meh. Peter Travers, he of Rolling Stone movie-dom, wrote, “By turning splatter formula on its empty head, Cabin shows you can unleash a fire-breathing horror film without leaving your brain or your heart on the killing floor.”  While “This is a movie that knows it is capitalizing on the clichés and stupidity of its genre, but refuses to bow to the same simple-minded standards to achieve something more,” is something that David Keyes of Cinemaphile.org wrote. Then, there was “I really loved it,” that was uttered by about 349,902,019 other people. Me? It was fine. Good. All right. Barely not a waste of time. Take any of those words, and you’d be accurate. I mean, I get it. I know why people love both Whedon and this movie as much as they do. But for me? Just not my cup of blood. Still, a ton of people seem to think this thing is genius. And it’s available to stream at a moment’s notice. Proceed, of course, with caution.

5. “30 For 30 Soccer Stories” — I have no good reason to put this here other than … IT’S WORLD CUP MONTH! So, no. You’re not getting some moronic gibberish from me on this. Just watch this video, check out some of the 30 For 30 vignettes, and get ready for the greatest sports event known to mankind! Oh, Landon … . 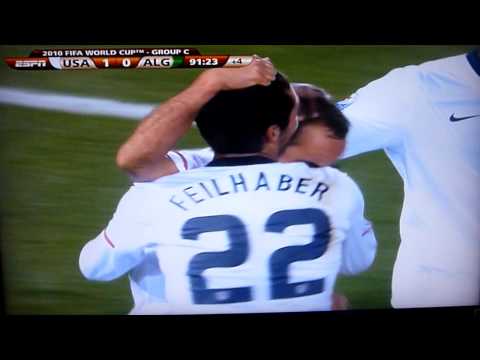