The National Museum of Civil War Medicine recently received a donation of a collection of items which came from the Pry family.  If you are familiar with my museum, you will know that our first satellite location is the Pry House Field Hospital Museum out on the Antietam Battlefield.  If you are unfamiliar with the story of this fascinating property, take a look at our website here:  http://www.civilwarmed.org/pry-house-field-hospital-museum/about-the-pry-house/  The Pry House was owned by Philip Pry’s family.  However, the items we just received belonged to the Samuel Pry family.

An undated photo of Philip and Samuel Pry, courtesy of Betsy Web.

Philip and Samuel Pry were brothers who both lived in Keedysville at the time of the Civil War.  They built the Pry House together in 1844, and a few years later they bought a nearby grist mill together.  They even married sisters!  Philip Pry married Elizabeth Cost, while Samuel Pry married Mary Cost.  In 1862, when the Battle of Antietam was fought, Philip & Elizabeth owned what is now known as the Pry House, while Samuel and Mary owned the Pry Mill.  Both of their properties were taken over and used as Union hospitals after the battle.  So you can see that the two families were closely connected!

A Library of Congress image of the Pry Mill.

The most striking item from the collection is the clock which belonged to Samuel & Mary Pry.  It was described to me as a mantel clock, so I was quite surprised when a very large box was delivered to my office.

You can see that the clock stands about 36” tall! It is actually more of a shelf clock than a mantel clock.

This is an eight-day weight clock and was manufactured by John Birge and Company in Bristol, Connecticut around 1834.  It has a large triple decker case with a carved eagle on top, columns on the sides, and round feet on the base.

The top tier contains the clock face. The small mirrored opening in the center can actually be raised to view the works inside. If you look carefully on the column to the left, you can see it is covered by a piece of clear packaging tape. I was not pleased to find that the shipper put that there! While it came off of the varnished door frame cleanly, it was more problematic on the painted column. A very gentle test at one edge proved that the tape was pulling the paint off the wood. After a bit of research into the issue, I used a hair dryer to heat the tape, which allowed me to ease the tape off of the paint more cleanly.

The bottom tier has a hand-painted scene on the door, with a heart-shaped window in the center to view the pendulum. The buildings portrayed in this scene appear to possibly be the original U.S. Capitol Building and White House.

The clock had to be partly disassembled before it was shipped, plus the pendulum arm fell off in transit, so I found an experienced “clock guy” to put it back in working order.  Not only was he was able to give me a lot more information about the clock, he made a “house call” as well!

David Myers of Boonsboro, Maryland, oils the works of the clock. It should be ready to run once he puts it back together!

Here’s a closer view of the brass clock works. You can see the chime and the striker at bottom center. The thin rod in the middle is the pendulum arm, and the cords on either side connect to two large weights. The clock has one for the time and one for the chime. Once a week, as the clock is wound, they are raised to the top of the clock next to the clock face.

Once I obtain a suitable case, I will have the Pry clock out on display at the Pry House.  I’d like to thank Betsy Web and Robin Jackson, descendants of Samuel & Mary Pry, for their very generous donation!  In the meantime, you can hear the Pry clock chiming in this video clip: 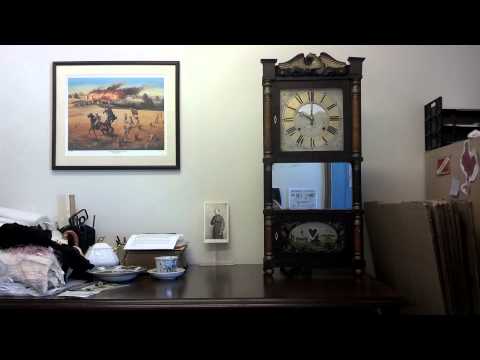 Photos courtesy of the National Museum of Civil War Medicine, except where otherwise noted.

You can view my entire blog at www.guardianoftheartifacts.blogspot.com.

Guardian of the Artifacts